Yesterday at lunch I went home and packed up all my stuff I would need for the evening. Then after work I was able to head strait to Heath’s house from my office. Heath and I had been marinating a big bag of chicken for a couple days and I was excited to stir fry it up.

So right when I got to Heath’s I got all the teriaki, ginger, sesame something flavored chicken fried up. Then Heath and Peanut got home and we decided to go on our run. Peanut was insistent on riding his bike though. 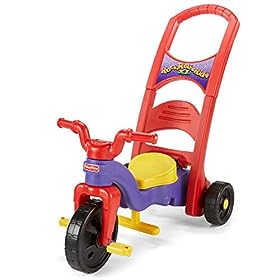 Luckily I had recently read an article on long distance runners seeing much improvement in their endurance from running fast paced intervalls so we decided to walk to the track so that Peanut could ride his bike and we could get there and do some intervalls. Peanut was very excited about getting to show off his new trick of being able to peddle the bike by him self. This bike has really grown with Peanut. He got it for X-mas last year and at the time could only really rock on it. Eventually he was able to stear enough that we could push him arround on it and now he can peddle it on his own.

He is on the verge of calling it his motorcycle and making noises as he peddles but for now he needs to concentrate on peddleing and stearing at the same time and in the right dirrection.

So we got to the track after lots of stops to smell the flowers or examine rocks and Heath and I got to do some running. We only used 100meters of the track running back and forth. Peanut tried to ride the bike toward us at all times and we would high five as we passed. After running we decided to do a few stairs and we ran the bleachers for a while and Peanut counted for us. He was actually pretty good and getting up and down the bleachers on his own. Then we left the track and went to the playground so Peanut could show us how he could climb everything there. I left the playground early and ran back to Heath’s. I took half the chicken out of the pan and added celery, onions, broccoli medley, pineapple and some jalapenos. I also got some rice cooking and in no time dinner was ready and Heath and Peanut were home. We all ate a bunch of dinner, even Peanut out on the porch in the back yard. After eating I got a beer and we played in the back yard for a while and the neighbor came over to talk about the move and stuff.

That was about it for the night we had to eventually drag Peanut inside and stick him in the shower.