Come On and type fast

I’m feeling kind of rushed this morning and I can’t wind down like I would like to. I found out the old tennents in my new house are haveing a garage sale for all there old stuff today. I thought the sale was not untill tomorow. So I really want to get some work stuff done and then make a run up there to check out the sale and see if there is anything we want before the good stuff is sold. I think the bar stools would be a good start and they are going to try to sell the fish tank we wanted for $1000. I may make them a low low offer on it if no one takes them up on the grand. 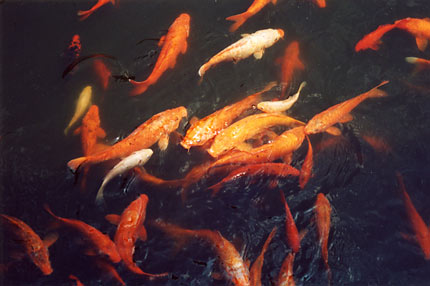 Well last night I rushed out of work grabbed my stuff and heaed off to Black and Vetch to pick up Jon. Then we headed to Heath’s house and loaded up the boat and cooler and picked up a box of burger patties and took off for the lake.

First we drove arround a few small coves looking for carp but did not see any. Then we went to Captain’s Cove and parked the boat. We got the bows and walked allong the shore trying to be real quiet and sneaky and stareing into the water. We walked for quite a way not seeing any sign of carp. Then as we crossed a low spot Jon saw one and fired off an arrow at it.

Unfortunately the arrow went just high and the fish got away. So we crept on hunting the illusive fishies. We would stop in areas that seemed to have a lot of rotting vegetation or were nice and shady and look around a bunch. In one of these spots I saw a turtle aways out and Jon and I tried to decide if we should shoot it or not then it diapered. A bit latter we saw a carp rolling around in some dead leaves just asking for an arrow and I though Jon had a better shot and he thought I did and my line was a bit tangled and he disappeared before I could get it sorted out.

Since I keep losing arrows yesterday I did not have an important part to my setup and this caused me to be always tangled up and always afraid of having an arrow come back in my face. On the bowhunting arrow you have the tip w/ barbs to not let the fish off then the shaft, usually no feathers and then a notch on the back. On the shaft is something we call a slider and it slides along the shaft so that when you shoot the part your string is tied to will move from the front of the arrow to the back not getting caught up in the bow. I did not have a slider yesterday and so just tied on to the back of the arrow. I was worried my string would get caught and bounce back.

But it never did. We did see a few more fish later on but were never ready to shoot and it was not as many fish as we thought there might be. However if we go back I think we will be more prepared and can blast one. After walking the cove we went back the boat and Peanut, Heath and Heath’s sister showed up and we cooked up some burgers and stuff and did some swimming and tried to wash off all the poison ivy oil I am sure we were walking in. After dinner Heath and the kids left and Jon and I hit another cove in the boat.

It did not look like a good cove so we left the scarry loud motor run as we investigated. We saw 2 or 3 carp swim away right as we got up to them and so Jon got out his bow and I drove the boat arround the cove. He got a couple of shots off but never hit any and we did not see a ton. This second cove was full of downed trees so we were swerveing all over and getting stuck ocasionally.

About this time the sun went down and it started to get dark so we took out the boat. FYI yesterday was the longest day of the year so I hope you all went outside and waited for the sun to go away. We took the boat back to Heath’s and since the new trialer lights still don’t work right I decided to leave it there. Now the lights are really bright when the headlights are on then go real dim when I touch the break. Opposite of normal. Also one side turn signal works and the other side just turns off when the turn signal is on. I don’t know why we have so much trouble with lights because they are so simple.

Anyway I drove Jon back by his work and we picked up his bike then I dropped him off at home and went to work for a few minutes to reboot all the servers. Then I went home and got cleaned up and went to bed after a peanut butter and jelly sandwich.

8 Responses to Come On and type fast