It would have been cool to take a picture like this:

but I did not take any pictures so you have to use your imagination.

Jon has a 4 phase plan to turn his big old bronco into a pontoon pulling sun and fun cruiser. 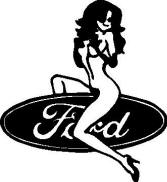 Phase 2 begins this weekend. First Jon will go to Pick and Pull Friday night and scope out the crop of motors. Then Saturday morning whenever they open we will quickly move in and take out the new motor as quickly as possible. I’m not sure when Phase 3 will begin yet.

So last night I changed at work and headed over to Jon’s house. I have never taken an engine out and I was curious to see how it works. Derrick showed up shortly after and he was in the same boat as me. Jon assigned us tasks and we got to work. Almost instantly we were covered in sweat.

My job was to get the radiator out. To get it out I had to get a big fan out and a big shroud thing. First I got all the hoses and connections off so the radiator and shroud were only held in by the fan. While disconnecting hoses and stuff I spilled a lot of antifreeze on the ground even though I had a 5 gallon bucket to aim for.

I paid for all this spillage when I had to lay down on the ground to get to some bolts and things. We also seemed to have some power steering fluid miss the bucket and some oil and lots and lots of sweat. So in no time my shirt shorts hair and skin was completely wet. 90% of it was sweat but the other 10% made me slippery. So anyway we worked that engine over and eventually got everything disconected and ready to go. Also Derrick put together Jon’s new cherry picker

So we were almost ready to begin extraction and took a break. We got out the BBQ grill and made a batch of double cheese burgers and french fries. Jon broke out some hot beers from the garage and ate and planned on how to get the 500lbs +/- motor from the Bronco to the floor of the garage. The burgers and beer were great.

Then we had a cold beer and talked a bit about the plan for Saturday morning. Jon believes it will take a lot longer not haveing the shop there to get random tools out of. I think it will take about the same time because I will bring wrenches.