Well it is a busy morning so far

Heath and I took on a fairly massive dirty laundry surplus problem this weekend.

When I got home last night I pulled the last of it off the clothes line and we were all caught up.

Then i browned some deer burger and added a diced onion a can of chili beans and a package of cheeseburger macaroni hamburger helper. I also got a pot of water boiling and shucked some corn on the cob and got it boiling. I also cut up a plum and cooked up some frozen peas. Then Heath came home with Peanut after his first day at his new daycare. We watched some creepy cartoon with a jet plane and other planes that talk in creepy baby voices and do stuff like eat too much candy.

Then we ate dinner. Peanut surprised me and ate a bunch of everything. After dinner we went to the Waldo Pet Store and got Peanut’s lizard some crickets. They have a lot of animals and we took the time to look at most of them. I was impressed at how cool this old rundown looking pet store was. Besides having lots of normal pets they had several huge ponds full of coy and stuff for backyard ponds. Peanut fed the coy and tried to get some of the fish food to a giant sneaky catfish that was in the pond. 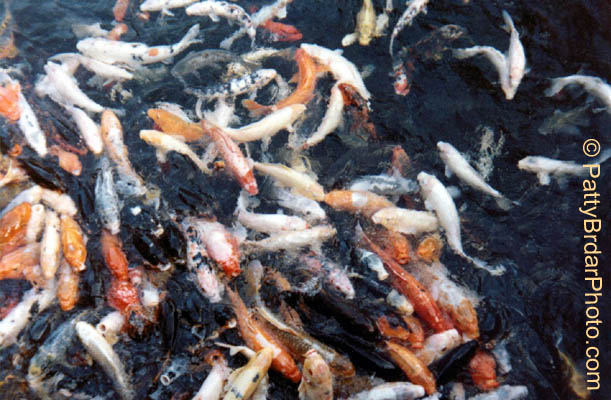 Wouldn’t it be fun to have a catfish pond in the backyard?

After the pet store we went to Lee park for a nature walk on one of the bike trails. It was a good time and Peanut was determined to fill any pocket he could find with walnuts.

This reminded me of my days as a young man when I never had enough room in my pockets for little treasures I would acquire on my adventures actually I don’t think I have ever grown out of this. I realized that as I moved my water bottle, wallet, cell phone, keys, and pocket knife around in my pockets to make room for walnuts and guns(sticks).

Once we got to a big bridge we were able to toss in all the walnuts and guns and watch them plop and see if they float or sink. Then we went back to the cooler and got our drinks and checked out the pool. We were thinking about going tonight but it is $7 per person for non Leawood residents. $7 even for Peanut and even though we would only be able to stay for 2 hours before they closed. They did not really have anything all that special for Peanut to do. They sprinkler park at the pool was not as cool as the free one at Loose Park and a pool is a pool and not much different from my Indian Creek swimming hole. But since we talked about going to the pool tonight I am going to research today on where to take a kid for a little swim. Any ideas?

8 Responses to Well it is a busy morning so far