Getting nothing done around the house

We decided several days ago that last night should be a date night but never came up with a plan for what to do. The last few days we had just worked on the basement wall and made xmas cards so we could do that or we could do something else.

Stephen came over after work to scope out the progress and that got us talking about the wall project and it was tempting to start working on it but both Heath and I felt like a run and wanted to get going before dark so we did that instead.

We got Berry and drove over to the Trolley Track Trail a little north of our house. We jogged from 85th to 75th and then back. On the way back we stopped by Jon and Amanda’s basement to check on the progress and get a drink of water. Jon was working on the shower and making progress. Once home Heath was starving so we decided to change clothes and head to a little bar and grill called The Daily Limit.

We got a few beers and a burger and nachos for a fair price. It was pretty nice. The bar is at Redbridge and Holmes in a strip mall set up. This is close to us but we never go other here so we drove around the whole thing to see what shops were there. More then 1/2 of the shops were closed and for sale. It was kind of sad. 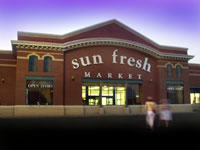 There is a Sunfresh Market there though so we went in there to scope it out and pick up some stuff.

What good is a date night without a run, a beer, a burger and a trip to the grocery store right?

Anyway it reminded me of grocery stores when I was young but had good prices and some different stuff. Meat prices were really good and we got several things. The beer caught up with us while we were there and we hurried out and home to use the bathroom. On the way out we saw some RedBox knock off called DVD Express that I had never heard of.

Once home we froze the meat and stoked up the fire.

Then got out the pool cues and balls and played pool for an hour or so.

The first game was really slow and close till the end. Heath beat me eventually. The next two games were better as they moved along faster and I won them. While playing I was sipping on some hard egg nog and it was delicious. I’m considering trying to make my own some time.

We played till bed time then packed the stove full of wood and went to bed.