I left work early, met Heath and headed to the doctors office. These little weekly appointments are pretty quick and we have the routine down now. We show up Heath fills a cup, the nurses weigh her and take her blood pressure and tell her to depants. The doctor comes in asks how much the baby is kicking, asks how Heath is doing. Then she measures her stomach 40 inches last night, then checks the baby’s heart beat. Then the doctor gets on her gloves and some goo stuff and disappears for a bit. She said Heath was a big 2 and pretty effaced (or stretchy down there) and the head is right there. Heath told her about where she hurts and the doctor said her pelvis bones are separating to make room for the head. Then everyone cleans up and heads their own ways till next week.

This week we had a little more since there are some changes at the Dr office. Her practice is sutting down October 1st and if Heath is late with the baby we could be with a different doctor. We talked about some options but really didn’t come to any decisions. It’s likely Heath will be early and we wont have to worry about it at all.

After the doctor we headed home for a few minutes so I could put on shorts. Then I read my book and Heath laid down for a while. Then we headed towards Olathe and picked up Peanut from daycare then headed to Target for a few things then to Joe’s Crab Shack. 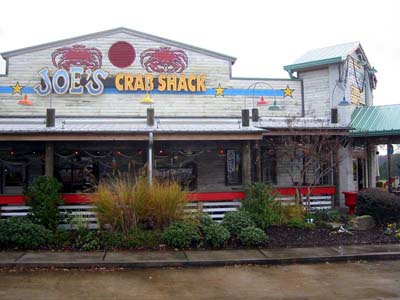 We met up with both our moms and and sisters there. We ordered some piles of seafood and stuff and talked and ate and opened presents and talked and ate some more.  All the food was pretty good. I got some seafood enchiladas that were really tasty but kind of small. I ended up eating 2 extra sides of coleslaw and probably one of fries and a few shrimp and things.

The servers danced a bit during dinner and then after dinner they turned down the music and got Heath and Peanut and took them to the middle of the room.

I broke out the camera and recorded a little video.

They wore goofy stuff and we sang to them and tried to embarrass Heath a bit. Then we paid up and headed out. After a picture out front we all decided to head for ice cream down the street and walked over.

Peanut Heath and I shared 2 massive scoops of something called Da Bomb covered in white chocolate. It was really good.

It was getting late fast and we rushed to the car. Heath’s mom had a pile of baby girl clothes she bought to give us. We still don’t know what we are having but she is sure it’s a girl and has been buying girl stuff all along. On the way home Peanut had to pee like crazy and we tried to keep his mind off it until we pulled into the drive and he unleashed on my truck tire.

Then we quickly got him in pajamas and ready for bed. Just as he was getting to bed Jon and Amanda showed up. We headed to the nursery and talked with them for a while and Heath showed off her nearly free rocker. Eventually everyone got tired and they headed home and I checked on Peanut and told him to fall asleep. Then Heath and I hopped in bed to read but she talked on the phone during most of reading time.