Everybody Do The Prewitt Roll

salmon, cream cheese, zucchini, avocado and green pepper in these guys
Heath had an appointment after work so I picked Pumpkin up and met her and Peanut at home after work then she headed to the appointment. I lucked out and Pumpkin fell asleep on the way home. I left her in the car seat turned on cartoons for Peanut and started getting stuff ready. I cut all the sushi ingredients I could think of and made an appetizer dip and made some vanilla pudding mixed with banana and strawberry for dessert. I got down dishes and talked Peanut into setting the table with them.

I got the grill going and tossed on a large salmon fillet. I sprinkled it with a little seasoning and left it for like 15 minutes.

Pumpkin woke up and we played and Peanut and I tried to distract her from her hunger. Jon, Amanda and Allison showed up shortly later.

We got the babies situated and Jon turned his steamed rice into sushi rice. Heath came home while we were making the rice and girls fed the girls in hopes of having them be good during dinner. I pulled the fillet off the grill and sliced it up so it would be easy to put in rolls.

Once everything was ready we all started rolling out the sushi. Even Peanut took a turn rolling them and thought it was pretty fun. Unfortunately we ran out of seaweed wraps early and had a lot of ingredients left and not enough sushi. We made the best of it and swapped them out for multigrain wraps and rolled up some more sushi with them. We ended up with a platter full.

We all dug in and everything was pretty good. The wrap sushi was probably not as good but it was not bad.

Peanut had fun playing with the chopsticks and at first just moved sushi from the platter to his plate but eventually we made him eat some of the terriaki chicken ones. He thought he was going to be like:

Pumpkin sat in her chair at the table and was good for a while playing one of her favorite games I think it is called “put this toy in my mouth, toss the toy on the floor and watch Pappy get it for me so I can repeat”

Alley slept for most of dinner and when she woke up Heath was excited to hold a little baby again.

After dinner we ate up my fruit pudding creation. It was pretty good and only took 5 minutes to make. After dinner the girls fed and ate, Peanut watched TV then went to bed and Jon and I played in the garage. We talked about saws and wood and cars and trucks and boats. This took a lot of time and then we came in to see what was going on. The babies ate a bit more while we watched my Home movie then Jon and Amanda headed home and Heath and I found more old cops on the DVR and watched some TV. 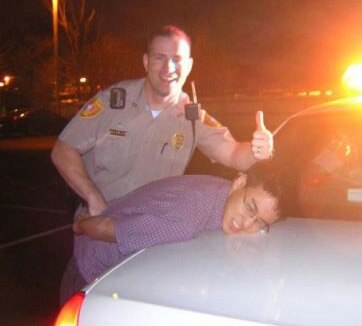 Once we were sure all the bad guys were in jail we headed to bed and dropped off Pumpkin in her crib on the way. This morning Pumpkin got Heath up at like 5:50 for a morning snack and I got up at 6 and was surprised to find the rain had stopped so I got to split and stack for a while.