Pumpkin has nothing to do with any carburetors but I didn’t take any pictures of the one I worked on.

She is not eating out of a bowl yet, so it makes a fashionable hat

I picked up Pumpkin from the babysitter after work and changed her diaper and changed my clothes then we headed outside. She sat in her play center and sang and enjoyed the nice weather and I worked on my wood pile.

There is still lots to split and lots to stack and lots more wood to get for next winter. Heath went to her aunts house after work to sew and Pumpkin and I hung out till we both got thirsty. Then we went in for drinks. I put her milk in some warm water because that’s how she rolls and I filled my glass with ice and tea because that’s my style. We sat on the deck and drank our drinks and tried to keep Berry from licking the baby. Then I stuck Pumpkin in the front pack and we poked around outside and in the garage and got some diapers going in the washing machine and fed the fish.

Then Heath came home and took over with Pumpkin and got her some more milk. I headed back outside and worked on the pile for a few minutes then Kelly and Chris pulled up in their truck with the 2 dogs and boat.

The dogs all went to play in the backyard and Kelly went to start dinner and make faces at the baby and Chris and I tried to figure out why his boat would not run.

Actually it would start and run but only for a minute or two before the engine would race and then die. His motor was a lot different then the one on my boat but close enough to understand how it works. His motor is air cooled so we didn’t have to submerge it in water to test it. Also it is only 7hp and 1 cylinder. Besides not running for very long the motor had a decent amount of gas coming out of the bottom of it.

Chris and I poked around and took stuff off and loosened things and tightened things and really the only thing productive we did was take off the carburetor and look it over and clean it up. 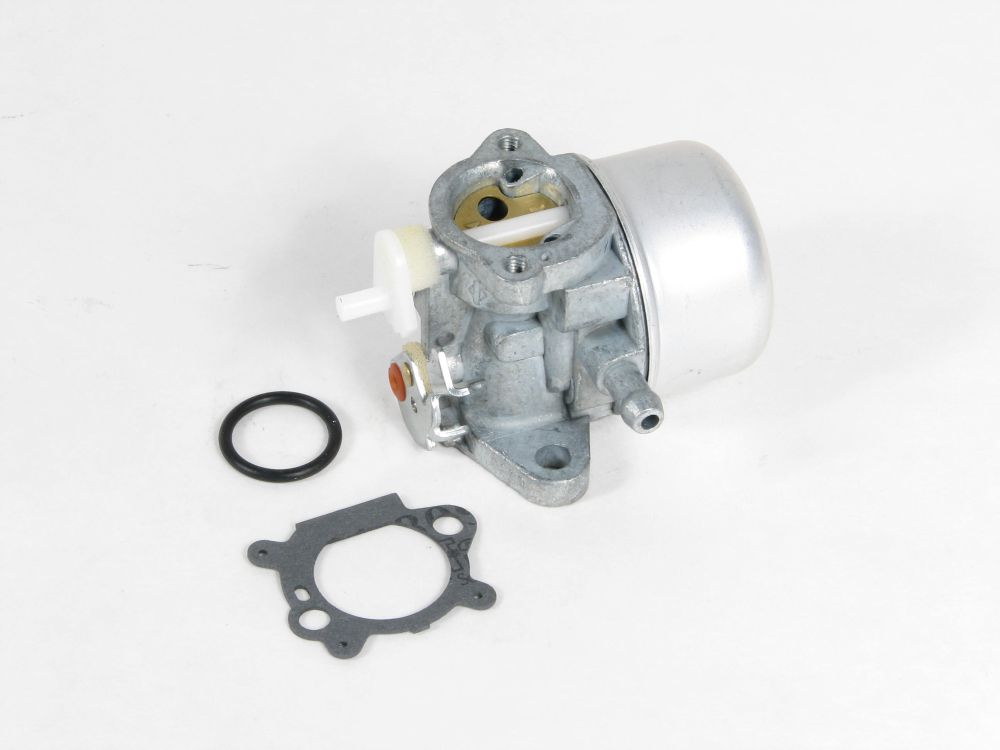 sort of like this but older and a little different.

We didn’t notice anything wrong so put it back on. Then dinner was ready so we headed in for Papa Murphy’s pizza with the girls. After dinner I played on Google a little and decided our boat symptoms pointed to a problem with the engine getting flooded with gas. So we messed with the gas pump and took off the carburetor again. I took off the part the gas comes in and tried to find anything strange but we were not really sure what it was supposed to be like so we were just guessing. We put it back together and messed with it for a while longer then I talked to Jon.

I told Jon the problems we had and what we found and when I told him about my concerns with carb and gas flow he assured me that was the problem.

So the bottom of the carb is a little metal bowl (it’s on the right on the picture above). The bowl fills with gas and makes a little donut float in the gas. The donut pushes a little needle up and down and the needles opens or closes the flow of gas.

Here is the needle and the donut. On Chris’ carb I can blow into the hole gas goes into and there is no change when the needle and donut are up or down. So too much gas is always getting through.

So we had the case solved but still not sure how to fix it. The motor is an early 80’s Sears model and certainly there are no new parts for it. So the next step may be a bigger challenge.

It was getting dark so we put away the tools and stuff and headed inside. Chris and Kelly are following 24 and it had already started so we rewound it and watched it with them. I have not been watching this season but not surprised to find Jack was as tough as I remember.

After the show Chris and Kelly and the dogs left and Heath and I got Pumpkin ready for bed then ate some ice cream and watched Cops. We got to bed a little early so we could get up early and work on firewood and step aerobics.

I’ll let you guess who did what.