Heath had the day off yesterday so after a morning of not working she picked me up for work and we went out for a special lunch on the plaza at Fogo De Chao.

Then bring them around to the table and slice you off as much as you want. 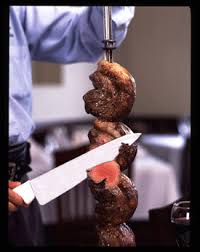 Heath and I knew to not unleash on the large salad bar. We got tiny salads and a bit of cheese and asparagus. Then flipped our meat cards over. Each person has a card with a red side meaning don’t bring me any meat and a green side saying present the meat. There were 15 different kinds of meats making the rounds. Several cuts of beef steak plus some pork, chicken, sausage and lamb. We were not crazy about their lamb but everything else was pretty great. Heath’s favorite was some chicken that was marinated in beer and cognac. Mine was a tie between 2 steaks that were so soft and tender.

Once we were really full of meat they brought out the dessert menu and Heath picked out some fancy cake.

It was complimentary for her Birthday.

Then back to work, I expected to be in a terrible meat coma and unable to function but actually felt really good the rest of the day/night.

After work I got home and Heath and Peanut were cleaning and organizing. We kinda wanted to do a picknick dinner but it was raining like crazy and there was no hope of it clearing off. We tossed around a few ideas of what to do for the birthday but never got after any of them. So Peanut and I did some awesome present wrapping.

Then Heath did some unwrapping quickly before Pumpkin could do it for her.

Once the presents were done we messed around with the wrapping paper and stuff and let Pumpkin tear apart all the grocery adds.

Then I cooked some noodle stuff for Peanut and Pumpkin and they both ate really good. Heath and I were too full. While the kids ate we played board games a while then made Root Beer floats. After the floats the kids took baths. Then they got ready for bed and read stories and stuff.

I mixed Heath and I up a few special root beer floats.

We spent the rest of the night playing on the computer and goofing off. For some reason the first time we watched this video we cracked up

One Response to Rainy Birthday Night at Home