(When Heath says “say cheese” Pumpkin thinks show teeth and wrinkle eyes/nose)
I don’t have a lot to cover today we had a pretty low key evening. Be sure to check out the new banner at the top of the page. It is much shorter and up to date. Actually there may be several new changes coming to the site in the near future like a move from Drupal to WordPress.

It was super nice out after work so we put on running clothes and pushed the baby down to the trail. The trail was still pretty snowy so we did not go far before getting back on the streets and running home. All 3 of us were pretty hungry so I got busy on dinner. Heath wanted a healthy meal for Valentines and I had an idea I was ready to try. Instead of rice or noodles I used diced boiled cabbage and topped it with a sweet and spicy shrimp. With the shrimp we also had some stir fry squash, green beans, celery and onions. All the foods are fairly bland so it was up to the sauce to make it good and luckily we had some Franks sauce that gave it most of the flavor and I just added some garlic, red pepper, white wine vinegar and splenda.

While eating we watched a romantic comedy, 500 Days of Summer. 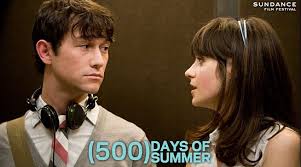 It really tasted as you would expect but not in a bad way. Durring the movie we played with Pumpkin and fed her lots. She is at a really fun age and makes everything into a little game. After the movie we all took showers and got on pajamas. I played with Pumpkin a bit then we read stories and she ate some hot dog bites then we said our good nights and she went to sleep. Heath and I tried some other wine that was not real good and relaxed till bedtime.

The weather has been so warm and my wood supply is so low that we let the fire die down and the house has been staying warm so far. However the basement is a little cool. It’s a little too cool for my young yeast so I moved it upstairs until for a few days so the fermentation can get going. It may not have been necessary though because I noticed we definitively have some science going on in my fermenter buckets.

The wheat is really putting off some gas and the IPA is bubbling but not as rapidly.

One Response to Our Valentines Day