This is a Turtle

Posted on September 1, 2011 by thePrewitt

Pumpkin can say about anything now. If she will say what you want seems to be totally random. Often times she is chattering away and sometimes we understand some real words and sometimes we don’t. Lately she has been stringing a few words together and we have understood it all. The best one so far is “I drew that” Pumpkin points to pictures she colored on the fridge or other places and reminds us that she is the artist. She also says “Love ya” and that was a really fun surprise a few days ago.

I got an e-mail from my sister sister yesterday responding to my questions about the hurricane and the monastery.

That giant tree was right outside my window! 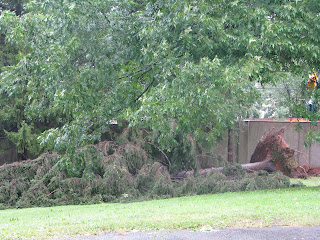 It was crazy. I got to help chainsaw it up (along with the little peach tree). 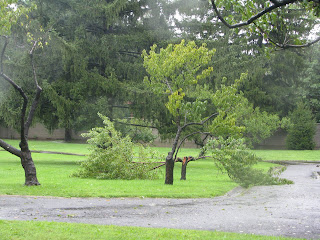 We got it lucky here we still have electricity unlike many people around us. (but we STILL can’t drink the water, I guess the plant flooded). 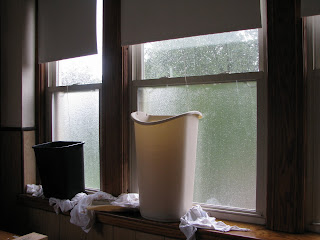 It was terrible trying to sleep because the winds kept howling and howling and then changing directions and slamming the rain and I have two windows which made it worse. It was exciting though. I’m glad I survived my first hurricane.Sr. Mary Magdalene of the Immaculate Conception 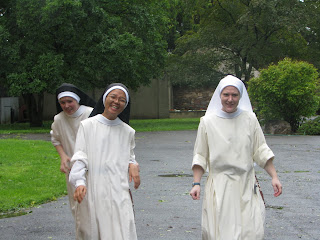 After work it was really hot out. I picked up Pumpkin and we headed to the Toyota dealer by my house and picked up mom’s GPS and some stuff from her car. Then we went home, messed with dinner cooking in the crock pot, grabbed some snacks and put on our suits.

The water was a little cloudy (guessing from the crackers the other day) but we hopped in. At first Pumpkin was just focused on getting all the grapes into her mouth. Once they were gone she had a new pool toy.

We played with it and the other toys and it felt much better. The water has a slight smell to it and the bottom was getting a little slimy so it was probably our last swim in this batch of water. I was thinking of adding some vinegar or something to the water but it’s probably not worth it.

We played till our stomachs were growling pretty good and we needed to move on.

We headed strait to the shower and left our swimsuits on while we rinsed the questionable water off. Then we got really clean and dried and I got the bottom 1/2 of Pumpkin in pajamas. The top 1/2 would be in the danger zone of food contamination so I left them off. I put her in her chair and she got busy.

While she was eating I checked on the crockpot. It had 3 sweet potatoes, 3 regular potatoes and a chunk of pulled pork in it. The potatoes needed a little more cooking so I did them on the stove with some broccoli. Heath was still at work and Pumpkin kept eating while I waited for her. When Heath did get home I opened up the “baked” potatoes and then topped them with cheese and mashed sweet potatoes and then topped them with pulled pork and stuck some broccoli on the side.

I ate really quick then took Pumpkin for the top 1/2 of pajamas and bed. We read a couple books then I laid her down. I got all dressed and encouraged Heath to finish working on the computer and get ready.We heard Pumpkin get out of bed so went and got her back in bed. Then Heath’s aunt showed up to babysit and Heath and I rushed off to Starlight. We had free tickets from my work for the A Prairie Home Companion Show.

It was hot but a good show. We laughed quite a bit and were really entertained. It went by quick and was longer then we expected and we ended up leaving a little early because Heath’s work stuff was due by midnight and she had a lot left. I ate a granola bar and went to sleep and Heath got back on the computer for an hour or so before finishing and coming to bed. We gave the bikes a morning off and slept in an extra hour or so.