Who’s ready for some bad pictures taken through a glass door with a camera phone in poor lighting?

EVERYONE!!!
So yesterday morning I tossed some fake mcribb patty things into a crock pot with the sauce and a bunch of beans. 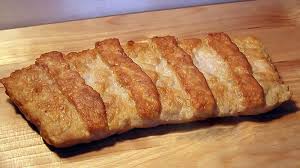 So when we got home it was super quick to warm up some corn and toss the patties on bread. It was not a great dinner and the serving of 6 did not fill my family of 4. However it did give us time to eat and change Pumpkin then head to the dance school place.

Heath had talked to them on the phone and we had been to another class but when we went to sign up they were iffy about letting a 2 year old into the 3 and older class. They decided to let her try it out and decide after the lesson.

We sent her into the room with the teacher and other kids and hid in the lobby. So she would not see us and would listen to the teacher. They did lots of fun activities and we peaked in through the glass every few minutes but tried to not let Pumpkin see us.

Peanut was pouty on not being allowed to join the 3-5 year olds class and instead having to do his homework.

After the class the teacher said she did fine and we could enroll her in the class. She was still really excited and jumping around the rest of the night.

After class we cruised by my Grandparents house to drop off some 88th birthday muffins for my Gramps. The kids needed to be in bed and were wound up and candy from the grandparents only made things worse.

Once home we got Pumpkin in bed and Peanut in the shower asap. Once Peanut was ready for bed we had some snacks and ready Harry Potter. Then he went to bed and Heath and I started the first episode of Game of Thrones.

so far so good

Then we went to bed. This morning I got up early and after getting trash out, got dinner stuff ready for tonight, a good breakfast for today and started on deer jerky for my backpacking trip. I cut some thin strips and sprinkled them with salt and brown sugar and brushed on some of this sauce.

I’ll let you know how they turn out.