We tried to get an early start but everyone was pretty excited about sleeping in. Eventually we did get going and Chiaki had a huge breakfast ready for us with rice balls, potatoes, onions and stuff. What we didn’t finish we packed up in our backpacks. It was raining pretty hard but we headed to the train station and bought our bullet train tickets.

This gave us access to the 3rd floor of the station and we had not been there before. We had about a 15 minute wait for our train and several flew past while we were waiting for it.

Then ours came and we hopped on. The seats were really nice with lots of room. We stashed the baby car behind our seats and got ready.

I turned on the GPS on my phone and as the train took off we watched the miles per hour climb. It seemed like in no time we were doing over a 100. We all looked back and forth between the windows and the phone as we went faster and faster. We were at about 160mph before we went under the first tunnel. This killed the GPS but when we came out it restarted and we were at about 165. We continued to speed up but were in and out of tunnels so fast it was tough to read our speed but at one point we were over 170mph.

We made a few stops and then got off at Hiroshima. It was a big station but I had been studying and we headed right for the correct exit. We turned the corner and walked a few blocks with all our stuff and found the hotel/hostel pretty easy. It was too early to check in but we were able to drop off our luggage.

Then we headed back out into the rain with the baby car and a small backpack of supplies. We walked almost 2 miles through the busy wet streets before we caught sight of the dome.

The dome is near the hypocenter of where the bomb went off and has been standing for almost 100 years.

We walked most of the way around it and managed to get some pictures from under the umbrellas and not get too wet.

After the dome we walked over a bridge and into the Peace Memorial Park. There were lots of memorials but the main ones we stopped at were the eternal flame and the cenotaph.

The eternal flame will burn until all the nuclear weapons are destroyed and the cenotaph is an archway that has what looks like a tomb under it. The tomb has names of all those killed in the bomb.

The rain was getting our shoes wet and making it pretty tough so we were happy to pay the roughly $0.50 for Heath and I and $0.30 for Peanut and enter the Peace Museum. I got to drive the stoller with 1 hand instead of 2 and it was dry and comfortable.  The museum was 3 floors with most of the 3rd floor being a long hallway between 2 buildings.

We had been a bit nervous taking Peanut and several times on the trip we had talks about the war and bomb and radiation and most of all being respectful.  He didn’t really get it at first and on the first floor we watched some videos and saw some models of the city before and after the bomb.

We read some to him and talked more and Heath and I censored some of what we read. The second floor we picked and choose what to stop and read/look at.

Peanut really liked seeing the giant metal beams from bridges that had bent from the force but we didn’t let him see the pictures of the people suffering from burns or recreations of melting skin or other terrible things.

He was kind of upset that we were censoring him at first but there was always something up ahead to look at.

I was pushing the stroller with Bean in it and the school kids started to fill the place the last section. I had to move fast and keep her hidden or we would get swarmed. The word “cute” in japan sounds like Hawaii with a ka- instead of a ha- at the beginning.  Also it seems when there is a cute American baby the norm is to say it in a high pitch, slowly by each syllable and then repeat  as many times as you can before the parents escape and say “byebye”.

This happened a lot all over Japan and usually it was old Japanese women but in Hiroshima the school girls were the worst. We told them her name but then when they spotted us later on they would all yell “Bean-chan, Bean-chan ka-waaa-eee” meaning something like little Bean little Bean CUUUTTEE”.

We finished up the museum and it was still raining but dyeing down. We went outside and found a spot to hide from the students on the ground under the museum. We ate rice balls and jerky and potatoes and other treasures in the snack bag and drank all our water. The rain died down some more and we made our way north out of the Peace Park area and across the T bridge where the bomb was aimed. We went through some trails and ended up near the Hiroshima castle.

I had read the castle was destroyed in the bomb and rebuilt smaller so we thought the guard wall was the castle at first.

And we took a bunch of pictures of it.

We made our way past the wall and to the real castle. For some reason we didn’t take any of our own pictures as we got close to the castle but this is what it looks like. 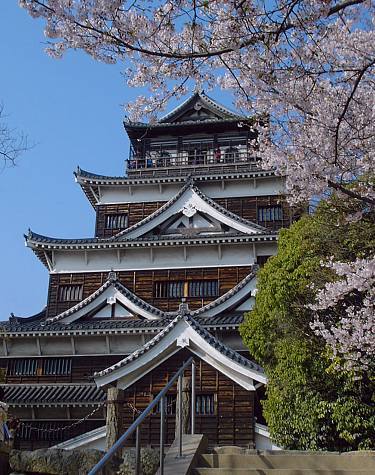 Then we ditched the baby car and headed up. There were lots of samarri costumes and swords and stuff and even a helmet and costume to try on.

Ohh I guess we could pretend that picture behind us is really a picture we took of the outside of the castle. That looks like a nicer day weather wise anyway.

The view from the top was good and the rain had completely died.

On top we could see big dark clouds in the horizon and decided to start the almost 2 mile hike back to the hotel. On the way out we stopped to check on a few trees that survived the bomb.

After the bomb went off everyone believed the ground would be unable to support plant life for 75 years but instead several trees survived and new plants and grasses started to sprout immediately and flourish. I was impressed by this and the way the people immediately began to rebuild. Besides doing the best they could for medical care and burns and such then restored electricity to parts of the city 1 day later and had cleared trolley train routes and got it running 3 days after the bomb in spite of something like 30-40% of the city population being wiped out.

It was now hot and sunny and we walked our way back in the thick of kids on the way home from school. We kept Bean hidden and did well but got pretty hot. As we got close we decided a beer and ice cream stop was necessary and found a great bar and grill place. Peanut had really good cinnamon chorizos with vanilla ice cream and mint leaves and Heath and I tried a few different drinks.

We felt super refreshed as we finished the walk to the hotel and we all took good showers and relaxed in the AC that I had cranked. It was nearly Peanut’s bedtime by this point but we still needed dinner and we were too near the end of our trip to go to bed on time.

We headed out and asked the front desk for some dinner recommendations. We ended up in kind of a shady looking entire 6th floor of a giant building. It was hot and a little smoky and full of nearly identical restaurants. They all served a special of Hiroshima, oknomiachi or something like that. We made a big loop and one guy called out to us in English, everyone cried out to us in Japanese to come eat but the English was easy so on our second loop we stopped at his restaurant and pulled up to the bar.

He served 1 dish but it took us forever to decide what to order. Heath and Peanut got the standard dish and I got the special variety that came with extra pork(bacon), squid and shrimp. He cooked in front of us on a big flat grill a lot like a Japanese steak house in American but not quite.

From what I saw he made a crepe then covered it in a big pile of shredded cabbage, then covered that in a fried egg and ramon noodles and spices and bacon and all sorts of things.

He flipped it a few times and added different things at different flips. Once he decided it was done he just scooted it next to you and left it on the grill.

We each had tiny plates and chop sticks and a weird mini spatula. We watched the other customers and the cook helped a bit and we realized we cut chunks of the okonamiachi off with the spatula and move them off the flat grill and onto our plate then we can add sauce or eat them up.

Bean was not happy about all the heat so I ate quick and held her away from the table then got up and took her to a cool area. Peanut ate a bunch. There was no kids size and he nearly finished a full portion.

After dinner we were kind of excited about the experience so walked around a while then got ice cream from a McDonalds (they are everywhere, even in Japan) and then headed back to the hotel. Peanut went right to bed and Heath and I split a beer and played iPad for a bit before going to sleep.

This entry was posted in Uncategorized, Vacation. Bookmark the permalink.