Well just like any other day today’s post deals with food and what I ate for dinner last night. Most of you would expect this to be a big juicy cheeseburger and Heath expected the same thing.

Last night after work I rushed home and quickly packed up Grandma Natty. I got all the gear, cooler, my clothes etc. and headed towards Hillsdale Lake. I got to Heath’s house and got dressed and put up a for sale sign then we continued on to the lake. We got the boat launched and headed strait for Captains Cove where we spent many evenings and afternoons last season. The water was pretty high still and out little island was still to deep to park on. We drove right over the top without touching it. So instead we tied the boat to a tree in the area and relaxed. We opened some beers and got into comfortable spots. I tossed in a fishing line and a lure but got no bites or anything. We listened to the radio and sipped our beers until some clouds rolled in. They looked like rain but we were not sure if it would come or not and decided to wait it out. Soon after that a big wind picked up, the sky went dark, and then it started dumping out the rain.

e pulled the boat over to the shore and tied it up and climbed into the thick woods to take cover under the trees. (The night before we had gotten rained on in the boat and immediately headed for the boat ramp but it stopped raining once the boat was out) We waited in the trees for a while but the rain did not seem to be stopping anytime soon so I suggested we bring the cooler and grill into the woods and cook our dinner while we wait out the rain. Heath agreed to this plan and I got the stuff. 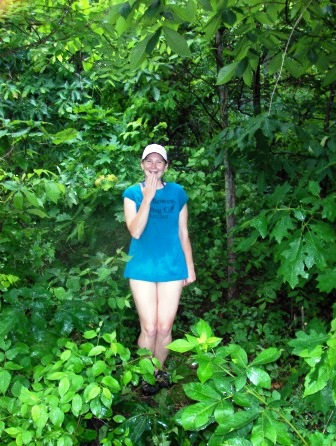 (Heath in out wooded hideout)

I set down the cooler and knelt down next to the grill and put it together and started to get it lit. Heath asked about the hamburger buns getting wet in the rain. I asked her what made her think we were having burgers and that she better check the cooler. She oppened the lid and was excited to see a bag of shrimp to grill.

“Keep looking in there”, I told her.

“Ohh wow Salmon too”, she said

“Ohh a bottle of wine too”

Then Heather moved the bottle of champagne and found a little box. I already being down on my knee was in perfect position to look up as she opened and saw this as I asked her to marry me. 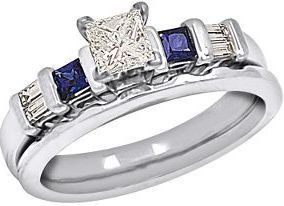 Right about this time the rain stopped and the clouds rolled away. 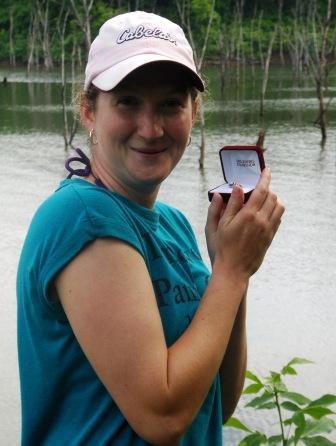 We popped open the champagne pulled the grill next to the shore and filled it with shrimp and salmon. 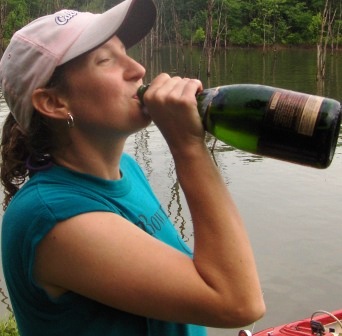 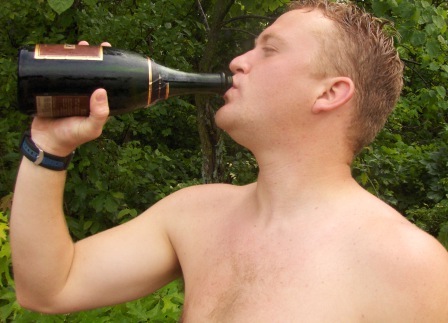 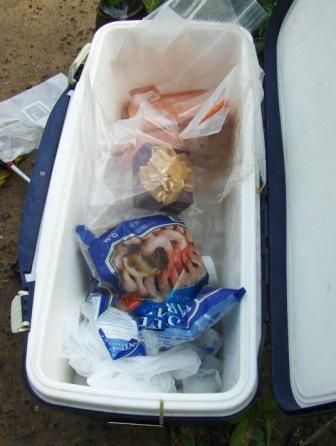 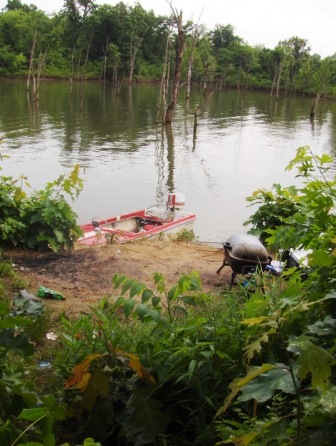 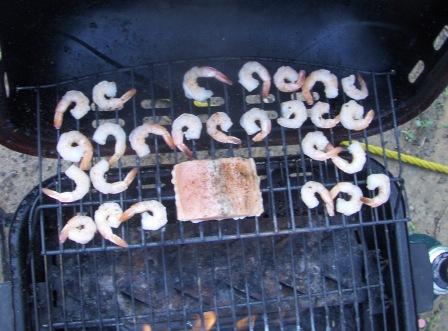 We spent the rest of the evening playing in the cove drinking champagne, eating shrimp and salmon, doing a little fishing and talking about being fiancés.

No one but the guy at the jewelry store knew I was going to ask and the only reason he knew was because he called me out on it.

A few days ago I walked into the store and saw only 2 salespersons waiting by the door in an otherwise empty store. The younger guy on my right says something like Ohh my when I see a gentleman come into the store with that nervous of a face I know he is here to buy a wedding ring. And I told him he was right.

Now I had come up with the idea last summer. My idea was that this summer if everything was still going well with Heath that I would bring her out to our cove and ask her to marry me on the island. This was our first trip to the cove this season and seemed like good timing. I was a little discouraged when the island was deep under water but decided on the boat over the island would be just as good. I sat on the boat waiting and waiting for Heath to ask about dinner and open the cooler but she never mentioned it even when I started to worry about the dark clouds rolling in she just relaxed. Then the rain came and I was sure she would insist we go back to her house but I suggested waiting it out and she was on board with that idea. Finally as we were huddled together under the thick brush watching the rain over the lake we decided to eat dinner and get the whole thing started.

22 Responses to The Proposal